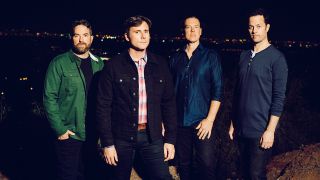 He’s jokingly trying out some new, less mature material, after we mention that Jimmy Eat World never fall into the trap of leaning on their glory days. He wonders aloud whether anyone would like "a song by people in their 40s saying school sucks”. He decides that, actually, it would be pretty funny. "I think that would be amazing," he says. "So school sucking is totally on the table for us now.”

It's clear that despite the themes of the new album being pretty heavy, the band are still having fun. When we see them perform at the Roundhouse later that same day, that same good energy is palpable: after 25 years, Jimmy Eat World still love to work together.

With 10 albums and some of the all-time most iconic alternative songs under their belt, Jimmy Eat World would be well within their rights to stop working quite so hard.

“We’re excited!” says Adkins when we ask him how he feels about the album’s release. It’s clear that he means it, and bandmate Tom Linton interjects to add that he can’t wait to start playing the new songs, either. “I think as musicians you’re always going to be the most excited about the thing you just did,” says Adkins, before adding that he’s aware that having an older fanbase comes with some drawbacks: “I know that as a fan it always sucks when you see a band play and they like, don’t do anything that you know. You’re stoked for new songs, but not if that’s the only thing that happens.”

“Surviving kind of sounds like the energy of an earlier version of us," says Adkins. "A core thing of what we do is guitar rock; on Surviving, a parameter we gave ourselves was: less should be more. Like, what’s the minimum we can do to get away with something feeling complete and full? That caused us to really lean on that core element of what we do.”

The central premise of Surviving is just that: survival. With almost seven years of sobriety under his belt, Adkins appears to be thriving – it’s clear in person, on stage, and in the music. It’s had a knock-on effect on every aspect of his life. “That’s kind of the lens I frame everything through now,” he says.

When drinking isn't on the table anymore, Adkins says, you're forced to look at yourself through a different lens. “You definitely discover some things about yourself. Like, why did you think that you needed to? What’s that about? There’s a lot to uncover, if you start unpacking that. It can be scary and uncomfortable, but I think if you’re willing to work through that, you end up in a better place for sure.”

He adds that for him, drinking wasn’t a leisurely occupation. “It was a job. It’s an all in, all hands on deck, this is what we’re doing job.” Realising that it was a problem, and overcoming it, was a journey in itself. “It’s like, when normal life stuff is kinda secondary to getting fucked up, then it’s sort of like, 'Oh! What am I doing here?'”

Through quitting, Adkins says he’s learned that the things you enjoy can be even more fun. "The things that you like, you really truly like, and you confirm to yourself that – oh, yeah, I actually like this!”

Jimmy Eat World’s first self-titled record was released in 1994, when Adkins was just 18 years old. The mix of political and personal lyrics that shaped albums like Bleed American and Futures – with their commentary on Bush, addiction and heartbreak – means that they serve as time capsules for the eras they were released in.

“It’s like, what’s happening now," says Adkins. "When you’re talking about an album of material, 'now' is everything between the last song you wrote and when the album comes out. So that’s like a three-year period of time, for us. A lot happens during that time. So that’s what you’re getting with one of our albums; the three-year update.”

On Surviving, the political lyrics that were largely absent from their intervening albums are back in full force, on songs like Criminal Energy and Congratulations. “I’ve been complacent,” says Adkins. "I got lazy under Obama. I was like, 'Eh! It’s fine! We got it!'” he laughs. Now, though, like many people, he sees no choice but to be political. “In America after a general election happens, it’s like, it’s always shocking to me how many people just don’t vote. How many eligible voters don’t vote. It’s like, who are you? It just boggles my mind how you don’t have any opinion. Like, really? But it’s shocking how many people don’t care. It’s mind-boggling.”

Jimmy Eat World have been a band for a quarter of a century (!), and like many bands who’ve been around for a while, their fans often have a preconceived idea of what they want from them. It’s a tough balancing act releasing and working on new material while being aware that a lot of the time, people just want to hear the old stuff.

Still, they don’t understand why bands would be mad about that. “It’s still really fun to play songs like The Middle, because everyone freaking out for something you did is a bad thing? What? I never understood that,” says Adkins. "People have a special place for the music that comes with the discovery of a certain group. Yeah, you might like other albums that they have, but nothing is going to be quite that important as the thing that you discover them with. That’s the same with me, I totally get it, it’s cool.”

Regardless, Jimmy Eat World never fall victim to leaning on nostalgia. They seem to have worked out a way to honour their legacy while constantly evolving, but it’s a tough line to walk. “The longer that we do this, I feel like we have a higher and higher standard for what we do. Everything that you do now lives right next to everything you’ve ever done. It’s like, you’re putting out a new album, but you’re also just in the long run adding to your catalogue of music. What you do better be as good as all that, otherwise what are you doing?” asks Adkins.

“I think a good gauge is when you discover that you’re laughing at yourself a little bit, you’re on the right track. I think unless you’re pushing your self perception a little bit, you’re not growing. The worst thing I feel isn’t necessarily coming up with an idea you don’t like, it’s coming up with an idea that you’re like, yep, that sounds exactly like me. That’s us right there! That’s a typical thing that we do! Then why? If it sounds exactly like you, then you’ve already done that.

“I think you have to be willing to alienate everybody, because that’s what everybody does on that breakout record. They don’t care if people like it or not.”

Surviving is a bold, vulnerable record that taps into old school Jimmy Eat World feelings while being entirely grown up. When announcing the record, they tweeted that the point of the songs was “the difference between surviving and truly living.”

I ask Adkins how he manages to conquer self doubt. “It’ll always be there," he replies. "It’s just part of being human. But I feel like if anything, I’m better at recognising it for what it is. In not letting it totally take me out of the game. But it’s easier to say than it is to do. Because yeah, it’s crippling sometimes. It’s completely paralysing. That’s one of the biggest hurdles you have to get over as a musician, is the constant self critique.

On Surviving, Jimmy Eat World have shown they’re still a force to be reckoned with. But in conversation, it’s clear that they take their own advice: Adkins never has any trouble laughing at himself.

Jimmy Eat World's new album, Surviving, is available now via The Orchard / RCA Records. Hear it in full below.