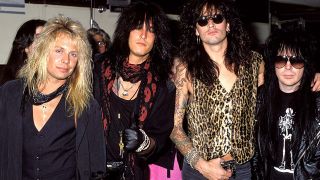 The track first appeared on the Crue’s album Dr. Feelgood, with the new promo mixing original live footage with clips from their successful Netflix biopic The Dirt.

The band’s fifth studio album was released on September 1, 1989, and also featured classics including Kickstart My Heart, Don’t Go Away Mad (Just Go Away) and the iconic title track – and it’ll be reissued later this year to mark its 30th anniversary.

Dr. Feelgood will launch on November 29 on a variety of formats: The anniversary edition will feature the full album along with studio demos, with the deluxe edition containing the album on ‘coke bottle green’ vinyl, CD, three 7-inch picture discs, a doctor’s bag, a prescription notepad, a deck of playing cards, a pair of drumstick pens, pin badges and guitar picks.

Bassist Nikki Sixx said: “After feeling robbed of a number one album with Girls Girls Girls, the band was hell-bent on topping ourselves on every level.

“Bringing in Bob Rock to produce and push us musically and lyrically was just what the doctor ordered. The band was clean, lean and sober and this album has some of our proudest work.”

This year has seen Motley Crue return to the spotlight following the release of The Dirt, with sales, streams and downloads of their back catalogue soaring as a result, while the book the movie is based on also re-entered the New York Times bestsellers lists – 18 years after it was first published.