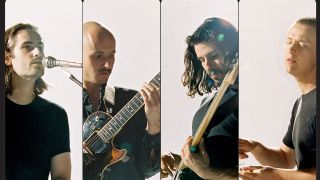 Australian jazzy psych quartet Mildlife have streamed their brand new single Rare Air. The song is taken from the band's upcoming album Automatic, which will be released through Heavenly Recordings on September 18. You can hear Rare Air in full below.

Mildlife explains Rare Air as being about “longing for clarity in the suffocating grip of everyday tedium. Wondering what life could or will be but trying to be present despite the temptation to endlessly pontificate every decision.”

“The recorded songs kind of become the new reference point for playing the songs live," saysvocalist Kevin McDowell. “They both have different outcomes and we make our decisions for each based on that, but they’re symbiotic and they both influence each other. It’s usually a fairly natural flow from live to recorded back to live.”

Mildlife released their debut album Phase in 2018 and have toured with the likes of. Stereolab and King Gizzard and The Lizard Wizard.

The band will stream a special live event via their Facebook page on June 6 at noon (BST).