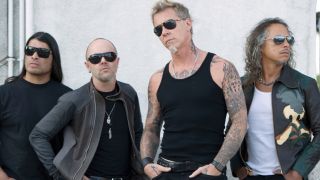 Lars Ulrich has given fans an update of what they can expect when Metallica stream their show from US Bank Stadium in Minneapolis on August 20.

The concert will be broadcast via Pandora in the States, Australia and New Zealand – and on Metallica’s website for those living outside those countries this coming Saturday.

Ulrich says (via Rolling Stone): “We haven’t been up in the Minneapolis area since the Death Magnetic tour when we played indoors, so it’s long overdue. There’s lots of Metallica love in that part of the country. We’re excited.

“I will often put the setlist together with the information from the last couple of times we’ve played, so I’ll have the last five set lists when we were in Minneapolis last time to make sure we don’t play exactly the same songs, we don’t play the same order. Probably the set list will be done an hour or two before the show.

“One of the main things for me is to try to mix it up as much as possible to give people a different experience.”

Pandora have also released a teaser video for this weekend Minneapolis show. Watch it below.

Metallica recently announced they would also play September’s free Global Citizen concert in New York on September 24, which will be streamed via YouTube and MSNBC, and audio on iHeartRadio.

They’ll join Eddie Vedder, Chris Martin, Cat Stevens and others at the fifth annual event, which seeks to encourage the concept of everyday people helping solve the world’s social problems.

Metallica are currently working on their 10th album.

The Top 10 Best Metallica Songs Of The 90s