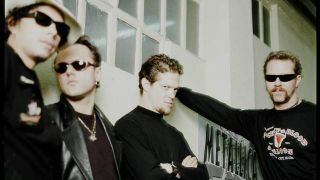 Metallica in 1996 during the Load era (Image credit: Shinko Musi\/Getty)

Metallica’s first decade saw the San Francisco quartet grow from scrappy, snotty outsiders into the world’s biggest cult band over the course of four peerless albums – Kill ‘Em All, Ride The Lightning, Master Of Puppets and …And Justice For All. The ‘90s were a much more divisive period for supporters of the band, with founding members James Hetfield and Lars Ulrich determined, as ever, to break fresh ground for their group and re-draw the blueprints of what Metallica could be. The result was some of the best, if most contentious, music of their career…

When Lars Ulrich told the world that, post-Black Album, Metallica were exploring a more “greasy”, dirty sound, he obviously had Fuel in mind. A Battery for the NASCAR demographic, there’s nothing subtle about the dumbed-down petrol head turbo-blues blaster which introduces 1997’s Reload album but there’s no denying its full-throttle roar.

One of two previously unreleased songs to feature on S&M, the document of Metallica’s bold collaboration with the San Francisco Symphony Orchestra (the other being the unremarkable –Human), the dramatic No Leaf Clover is one of the band’s most under-rated compositions, with James Hetfield’s bleak lyrics (‘It comes to be that the soothing light at the end of your tunnel is just a freight train coming your way…’) accentuated by Michael Kamen’s brooding orchestration.

Originally titled Mouldy, as James Hetfield and Lars Ulrich considered its main riff reminiscent of Husker Du/Sugar mainman Bob Mould’s guitar style, this slow-burning Load highlight is a masterclass in employing light and shade and push/pull dynamics to take the listener on a journey. The song’s video, meanwhile, is memorable for employing a rare use of erectile dysfunction in the story-line.

7. Wherever I May Roam

Towards the end of the ‘90s, with their cover of Bob Seger’s Turn The Page, Metallica dealt with the mundane, often soul-sapping, realities of being a touring musician, but on this Black Album highlight, with its memorable ‘Rover, wanderer, nomad, vagabond’ refrain, James Hetfield makes life on the road sound positively heroic.

The world’s first taste of the controversial and unfairly maligned Load album, this 1996 single is a Southern Gothic-tinged reflective meditation upon death and loss, all the more powerful and affecting for being inspired by James Hetfield’s knowledge that his estranged father Virgil had incurable cancer.

Metallica’s first single of the 1990s was both their passport to the mainstream and the song by which their decade would be defined. Thrillingly direct, immediate and impactful – in stark contrast to the labyrinthine twists and turns of the …And Justice For All album - it kicked down the doors for the band on US radio, and ensured that the Black Album became first true ‘event’ album of the ‘90s.

An absolute beast of a song, Sad But True laughs in the face of anyone claiming that Metallica turned their back on ‘heavy’ music in the ‘90s. Proving the old age that less is sometimes more, its elemental, down-tuned riff is given room to breathe in a spacious arrangement that would have mystified the youthful thrashers who made Kill ‘Em All, lending the track a rare authority and power.

Dealing with themes of rebirth, regeneration and renewal, Bleeding Me is a perfect encapsulation of Metallica’s mindset when approaching the Load album. ‘I’m digging my way to something better’ sings James Hetfield at the outset of this masterfully controlled, suspenseful eight minute epic, a song undeniably influenced by the singer’s burgeoning infatuation with mid-‘90s stoner rockers Corrosion Of Conformity.

Though the Black Album was released one month ahead of the fifth anniversary of Cliff Burton’s death, the late bassist’s colossal influence upon Metallica resonates in every bar of this majestic metallic symphony. There are echoes of Ennio Morricone’s iconic spaghetti western soundtracks in this sobering, thoughtful treatise on life, love and liberty, but it would have been impossible without Burton’s schooling of the band in the sturm-und-drang dynamics of European classical music.

The highpoint of Metallica’s ‘90’s output, Load’s closing track is an atmospheric weighing up of loss and regret, which, as with The Unforgiven, unfurls into a widescreen cinematic epic. Metallica were forced to cut a whole minute from the song’s outro on Load to accommodate the CD’s running time - the full length version later surfaced on the B-side of the The Memory Remains single, wryly sub-titled (Unencumbered by Manufacturing Restrictions Version) – but the breath-taking version on S&M shows this remarkable band at their transcendent best.