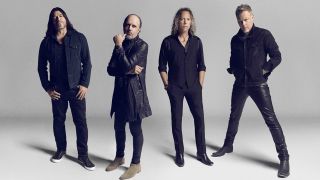 Metallica have been named as the recipients of this year’s Polar Music Prize.

Every year, two artists – one from contemporary music and one from the classical genre – are celebrated for their significant achievements in music.

The awards ceremony will take place at Stockholm’s Grand Hotel on June 14, with Sweden’s King Carl XVI Gustaf and members of the royal family in attendance on the night.

It will be broadcast live on Swedish national television and throughout Europe via TV4 Play.

Metallica drummer Lars Ulrich says: “Receiving the Polar Music Prize is an incredible thing, it puts us in very distinguished company. It’s a great validation of everything that Metallica has done over the last 35 years. At the same time, we feel like we’re in our prime with a lot of good years ahead of us. Thank you very much.”

Bassist Robert Trujillo adds: “Receiving the Polar Music Prize is such an honour, especially sharing it with artists such as Joni Mitchell, Keith Jarrett and Wayne Shorter, who I admire dearly.

“It’s incredible to be recognised and honoured in this way, to me, it’s very prestigious. Hopefully this will inspire younger generations of musicians to keep the music alive.”

Meanwhile, the first picture of Metallica vocalist and guitarist James Hetfield, taken on the set of the upcoming biopic about serial killer Ted Bundy, has emerged.

Hetfield will play the role of Officer Bob Hayward in the Joe Berlinger-directed film Extremely Wicked, Shockingly Evil And Vile.

Metallica’s European leg of their WorldWired tour in support of 10th studio album Hardwired… To Self-Destruct, continues tonight in Bologna.

Metallica: On the road with metal's biggest band