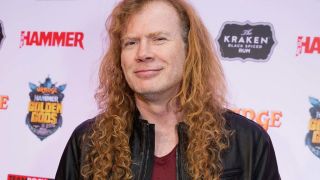 Megadeth’s Dave Mustaine is working on a 30th anniversary edition of the band’s debut album Killing Is My Business… And Business Is Good.

It was released in 1985 and the band’s mainman, who picked up the Metal Hammer Golden God award in London last week, reports on Twitter that he’s working with producer Mark Lewis on the project.

Speaking to Metal Hammer last month, Mustaine revealed he wasn’t bothered about what critics thought of the album when it was first released.

He said: “There were comments good and bad, but I didn’t care. All I knew was that I’d stuck my flag in the ground, and from then on we were going out with all guns blazing.”

Mustaine recently said his work with the San Diego Symphony in 2014 has helped shaped their upcoming 15th album, and promised the follow-up to 2013’s Super Collider would be “aggressive” and “dark.”

He’s in the studio with Ellefson, guitarist Kiko Loureiro and Lamb Of God sticksman Chris Adler. The as-yet-untitled album is available to pre-order via Megadeth’s PledgeMusic page.

Megadeth feature in the latest edition of Metal Hammer – on sale now in print, digital and via TeamRock+.