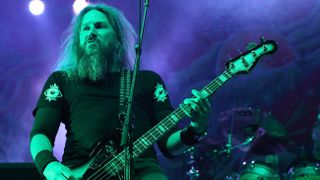 Troy Sanders says Mastodon’s seventh album is “in the bag.”

The band were working with producer Brendan O’Brien in Atlanta on the album, before moving to Los Angeles for the mixing stage. The follow-up to 2014’s Once More ‘Round The Sun is expected to be released in 2017.

Bassist and vocalist Sanders tells Metal Hammer: “We’ve got it in the bag. We’re just putting a timeline together of when and where. So that’s all coming together now. So 2017’s going to be an incredibly busy and fruitful year in the world of Mastodon.

“I’m fortunate to be able to say that. I’m very excited for what the new year will bring.”

Sanders also says that his other band, supergroup Gone Is Gone, hope to tour the UK if they can find an appropriate gap on their individual schedules.

The band features the Mastodon singer and bassist, At The Drive-In drummer Tony Hajjar, Queens Of The Stone Age guitarist Troy Van Leeuwen and guitarist and keyboardist Mike Zarin.

Their debut album Echolocation is due for release on January 6 of next year via Rise Records. They have previously only played gigs in the US.

But Sanders hopes to take the band further afield, including to the UK.

He tells Metal Hammer: “We’ve talked about it, but the thing with this band is that we’re going to try to do as much as we can with the time that we have – which in reality is very slim.

“Between At The Drive-In, Mastodon and Queens Of The Stone Age, it’s very rare that we’re ever all home at the same time.

“We are going to do a record release show in Los Angeles on January 6, the day Echolocation comes out. So we’re already talking about windows of time, and the next item on our agenda is doing a UK tour.

“So, I’m sure it’ll happen, I just don’t know when yet. But it would be 2017, and all four of us are very excited about making this happen, it’s just about looking at our calendars collectively and saying, ‘Okay, it’s going to be at this place and this time’.

“So, yes, I promise you that that’s actually the next thing on our to-do list, is to bring it to the UK. I would love that.”