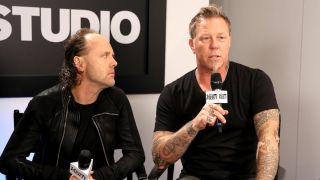 The frontman admits his relationship with Ulrich can be tense at times, but insists they quickly make up after any falling out.

Asked when was the last time he told Ulrich to go fuck himself, Hetfield tells Metal Hammer: “About eight months ago.

“We were in the studio and it was like, ‘Hey, I’m the guitar player, I like this guitar part, I wanna play it.’

“But a week later we were talking again.”

The full interview with Hetfield and his bandmates can be read in the current issue of Metal Hammer magazine, of which Metallica are the cover stars. It’s available now in print and via TeamRock+.

Metallica’s 10th album Hardwired…To Self-Destruct was released this month and has had huge success around the world in terms of sales and chart positions.

They have just added another date to their WorldWired tour – they’ll play an intimate show for fan club members at the Opera House club in Toronto, Canada, on November 29.