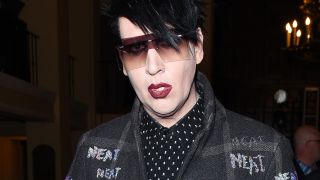 Marilyn Manson has landed a role in the upcoming third season of American Gods.

American Gods’ show runner Chic Eglee tells the website: “As a long-time admirer of his estimable talent as an author, artist, musician and actor, it is dope indeed to be working with Mr Manson in Season 3 of American Gods.

“Bringing his specific energy, wit and boundless enthusiasm for all things Neil Gaiman to the role of Johan, a Norse berserker in service to Odin, his performance promises to be disturbing, original and uniquely entertaining.”

The third season of the show will premiere on the Starz network in the US in 2020 and an internationally on Amazon Prime.

In July, Manson spoke about his upcoming studio album which will see him hook up once again with  Shooter Jennings, with whom Manson collaborated on a David Bowie cover in 2016.

He told Revolver: “I’m in a mode in life where I wanted to tell stories with this record, and it's sort of like a wax museum of my thoughts, a study of the chamber of horrors in my head."

Manson will return to the road later this month for a run of live shows across the US.