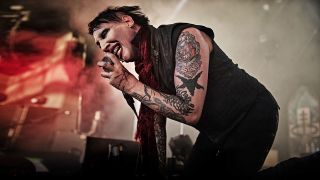 “Listen to the album, it really grows on you – like herpes.” Marilyn Manson says when we meet at Soho House in Berlin. We’re here to talk about his latest album, Heaven Upside Down – made with producer/instrumental mastermind Tyler Bates – but a conversation with the self-styled God Of Fuck is always going to include a few curve-balls. Conversation veers to from new music to Wal-Mart, mortality, his collection of razors and… eating leeches. The man no longer known to anyone as Brian Warner (since his parents died, his mother in 2014, his father in July this year) could never be accused of being dull.

Heaven Upside Down is reminiscent of your albums Antichrist… and Mechanical Animals, but I’d assume you’re not looking back on purpose.

I think that I wanted to make cinematic albums when I made those two. And they were both dangerous in different ways. One was in New Orleans – Antichrist Superstar – where I was completely in a state of nihilism and… well, ‘nihilism’ might not be the right word. I was in a state of wanting to make things change in the world. For Mechanical Animals I moved to Los Angeles, and I was pissed off at the fact that they were going to make me into something I wasn’t, so I wrote a record about it before it happened. This record is more of me – after making Pale Emperor, which still will be one of my favorite records because it gave me back my swagger as a singer. It gave me back my confidence as being able to sing and being able to do things and handle loss and handle things, and not let it affect my music, in a literal sense. Pale Emperor was the opening act for this record, I think, in some ways.

One of the strongest lines on it is: ‘I write songs to fight and songs to fuck to,’ on Jesus Crisis.

‘If you want to fight, I fight you. If you want to fuck, I fuck you.’ I debated that song, the lyric, at first. I think that I probably wrote it down as a post-it note and put it on my refrigerator, just as a ‘to do’ list… [chuckles] That’s kind of a joke, but essentially I wrote it down, and it’s a basic manifesto of myself. It’s like my resume: I write songs to fight and to fuck to.

Well it’s a pretty aggressive yet sexy album, isn’t it?

I wanted it to be both of those things. A lot of people that I played it for initially thought it has an implying feel of threat to it, a threatening sexual tension to it. And I said: “So do I” [laughs].

Or it is a new Uber commercial? [chuckles.] If it’s ‘I know where you fucking live,’ then it would be more of a stalker; but ‘We know where you fucking live’ is just… I was very, very aware, very specific about pronouns while making this record. I was very conscious of that for the first time, cos I realised how important it is when you say words like that. Like in the song Kill 4 Me, the title has ‘me’, so it’s sort of an open-ended statement. It’s not really a commandment, but I say: ‘Let’s grab our gold switchblade, and make us a blood pact, babe.’ That’s the first time on the record where it becomes romantic. And it’s strangely a pop song which they want to put on radio, and it’s going to say ‘kill, kill, kill for me’ [chuckles] on radio. I find it to be sardonic, in the same way as Bowie and Iggy Pop when they, here in Berlin, did The Idiot and Low and these things. It has that sense of sarcasm disguised in a pop song.

And you’re not hiding behind a character or a concept?

No, it’s just me, it’s unafraid to be me. They said to make a radio clean version of it. I said fuck you. So we made one that is just: ‘We fuck, where you fucking fuck, fuck, fuck, fuck for me…’ We gave it to the record label and said go fuck yourself. Cos it takes away the whole beauty of the record. It’s not about profanity, it’s just about… like: why would you take something that’s pure and great and honest… And they said: [mumbling] “Well, Wal-Mart. Wal-Mart wants a clean version.” We all know Wal-Mart sells guns, and I just said: “Listen, if your parents give you money to buy a record, and you want to go buy a clean version at Wal-Mart, you should go buy a gun and purchase a clean record elsewhere with the gun on your own terms. No suggestions implied here, but I’m just saying…” [chuckles].

Why did you change the original title, Say10?

How was playing Satan’s best friend in the Salem TV series?

Actually, I didn’t really watch the show as much as I should have [chuckles]. Well, it’s very strange when you’re on a show, you’re there. Sometimes you’ll watch the playback, but things change. So when you watch it, it seems a little narcissistic and self-indulgent. But also it wasn’t a show that I found to be the most interesting of things I want to do. But I completely enjoyed doing it, made a lot of good friends doing it, and everyone was great to work with.

The role of [barber/surgeon] Thomas Dinley seems tailor made for you, doesn’t it?

It was fun, yeah. I enjoyed it. And I told Johnny [Depp]: “So, you were in Sweeney Todd?” And I told him about the role, and he asked me if I wanted to borrow his Sweeney Todd razor, and I’m like: “I don’t think that that will be historically accurate to this show, but I appreciate the offer.” But it’s strange, because I do collect straight razors. I have a collection of them, unrelated to the show.

Rumour has it that Dinley’s ‘treatment room’ looks just like your living room. Is that true?

Well, my living room is not that dirty, and I don’t have much of things in jars, exactly. But there were a lot of medical instruments, and they did give me this sign as a gift, which said something like ‘Shaves/Teeth pulling/Enemas’. Which is an odd assortment of things.

Did you actually eat leeches while you were shooting the TV series on location?

They wouldn’t let me eat the entire leech, I had to spit it out. There was a “leech wrangler” – someone who defended the rights of a what I believe to be a spineless creature. When I was a kid I used to put salt on leeches all the time. They would just shrivel up. That was enjoyable for me, but that’s also probably portraying one of my early psychopathic behavior characteristics [chuckles]. And they wouldn’t let me swallow it.

Do you take acting seriously, or is it just a fun thing for you?

I’m going to take it more seriously. I mean, I’ve always taken it seriously, I just want to do more of it. I have a couple of things that I plan on doing at the beginning of the year. Odd things involving friends of mine who are actors and directors. And challenging roles. Very challenging. I’m really stepping out of my safe zone. But it’s my own version of Halloween. I can’t do anything on Halloween, so I’m fucked on Halloween. So instead I get to act [chuckles].

So far your acting roles have almost all been villains. Is that your niche?

Not necessarily. I think that I’m going to be a very sympathetic hero in one film that I want to do. And I think in another one I’m going to play a woman [chuckles]. Not a man as a woman, but just a woman.

What’s happening with your painting? Your last exhibition was in 2014. Are you planning on having any more?

Yeah, I haven’t done one in such a long time, and it’s my own fault. But I did not stop painting. I have about sixty-five paintings that no one’s seen. Half of them are all-black tattoo ink that I used, and I think I mixed some of those with vodka or urine. Not to be controversial, just because it was the only fluid available. Cos I’m drinking, painting, run out of water, I got piss or vodka – pick one or the other. The other ones are very pale and pastel. So they’re beautifully contrasting.

You’ve been portraying the ugly American for so long now, and you’ve got Trump, who represents just that: the ugly, arrogant, angry American…

Does it? Or does it make Marilyn Manson redundant, in a way?

It makes it no different than before, I don’t think. Whenever there’s politics that are so overwhelmingly consuming in everyone’s everyday life, people will say to me: “Hey, did you see what happened today in politics?” No. I was asleep. I don’t want to talk about that, it’s redundant – everyone else is talking about that. So I’d rather talk about something else. So people perceive things on the record as being commentaries on politics, and that’s one way of looking it. I’m sure that’s part of my unconscious, but not more so than before; I think less than before. This time my main focus was making beats that were appealing to people, and then putting beautiful orchestration around my lyrics so that it was cinematic.

Have you thought about turning fifty? And if you have is that a scary thought for you?

Marilyn Manson plays UK dates from December 4 to 9. Heaven Upside Down is out now via Loma Vista.