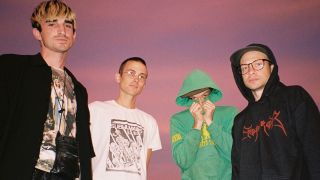 Los Angeles-based grunge/shoegaze outfit DIIV have released the video for their new single The Spark exclusively with Louder.

The promo was animated and edited by Ruff Mercy and is the only love song on the album, with Cole Smith's fiancée Dani also appearing in the video.

Mercy tells Louder: “When I look back at the videos I have created, my favourite ones are always the ones that felt more like playing than work. This is one of those videos.

“I was lucky to be given such random and raw footage shot by Cole Smith and Dani and also lucky to have such a beautiful track to cut it all too. This one makes me smile.”

Deceiver was written and recorded after Cole Smith’s battle with heroin and his subsequent treatment, and is said to be “a cathartic album about facing your demons.”

Cole Smith says: “I’ve known everyone in the band for 10 years plus separately and together as DIIV for at least the past five years. On Deceiver, I’m talking about working for the relationships in my life, repairing them, and accepting responsibility for the places I’ve failed them.

“I had to re-approach the band. It wasn’t restarting from a clean slate, but it was a new beginning. It took time – as it did with everybody else in my life – but we all grew together and learned how to communicate and collaborate.”

DIIV are currently preparing for their UK and European tour, which will run throughout February and March with special guests Chastity. Find a full list of shows below.