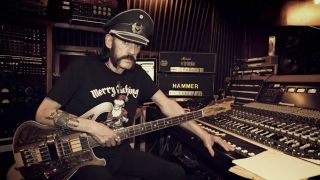 Lemmy says he sick of being asked when he’s going to die.

The Motorhead frontman has struggled with ill health in recent years, and a number of shows on the band’s recent US tour were cancelled or stopped early as he suffered with a lung infection, exacerbated by high altitude.

But the 69-year-old rock icon insists he’s doing just fine and adds that he’s fed up being asked about his health.

He tells Classic Rock: “I’m sick of the fucking, ‘Are you going to die?’ line of questioning. It’s getting really old, that question. I’m alright. I’m going out there and doing my best.

“I have good days and bad days but mostly I’ve been doing alright. The last tour of the States was very good.”

Lemmy adds that, even though he’s approaching 70, he has no intention of retiring.

He says: “It’s when you get to 60 when everything starts to go pear-shaped. Everyone thinks that becoming an older guy is easy, but you never consider it fully. It comes as quite a shock. But the thing is, I don’t want to give in to it.”

Motorhead are mourning the death of their former drummer Phil ‘Philthy Animal’ Taylor, who died last month at the age of 61.

This month, the band were forced to deny rumours that guitarist Phil Campbell had died. They had to cancel shows in Europe after Campbell was treated in hospital for an undisclosed health issue.

Read the full interview with Lemmy in issue 218 of Classic Rock magazine, out now in print, digital and via TeamRock+.