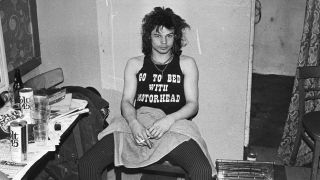 Lemmy has led the tributes to former Motorhead drummer Phil Taylor who died this week at the age of 61.

The frontman tells Classic Rock he’s “devastated” to have lost one of his best friends as he also remembered former Motorhead guitarist Michael ‘Wurzel’ Burston, who died in 2011.

Lemmy says: “I’m feeling very sad at the moment, in fact devastated because one of my best friends died yesterday. I miss him already. His name was Phil Taylor, or Philthy Animal, and he was our drummer twice in our career.

“Now he’s died and it really pisses me off that they take somebody like him and leave George Bush alive. So muse on that.

Taylor – who enjoyed two stints with Lemmy and co between 1975-1984 and again from 1987-1992 – died on Wednesday night and his passing was confirmed by the band’s former guitarist ‘Fast’ Eddie Clarke.

Motorhead made a collective tribute via their Facebook page. It reads: “Lil’ Philthy, he who once shouted, ‘Stop wincing about’ on an album. He who fueled many a young boy’s punk/metal hairstyles. He who played the drums with fury and intent. He who liked to call people ‘wazzocks’ once in a while. Friend, Roman, Derbyshireman – rest in peace.”

Taylor appeared on the band’s debut album On Parole and played on a further 10 albums, including 1979’s Bomber, 1980’s Ace Of Spades, and 1981 live album No Sleep ’Til Hammersmith.

He contributed to 1992 album March Or Die but departed the band during the recording process. The album was completed by drummers Tommy Aldridge and current sticksman Mikkey Dee.

No cause of death has so far been confirmed.

Ozzy Osbourne: It’s a terrible, terrible loss. He was a great friend - great drummer - a great guy and he will be dearly missed. Today is a very sad day for me. Rest in peace - and he still owes me 500 bucks from that time in Vegas.

Slash: Sad, sad news about losing Phil ‘Philthy Animal’ Taylor. One of the best drummers in rock’n’roll. RIP Phil, you will be missed. A lot.

Dave Mustaine: “I am very sad to hear about the passing of Phil ‘Philthy Animal’ Taylor. My condolences to his family. Rest In Peace Phil.

Mike Portnoy: RIP Philthy Animal Taylor. Motorhead’s Overkill was one of the first double bass songs I ever learned.

Jamey Jasta: “What a legend. He changed the world of heavy metal drumming. Double bass animal. Gonna go blare Overkill in his honour.