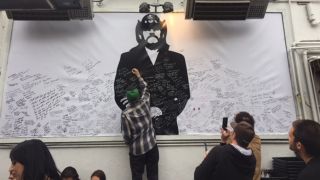 The funeral service for late Motorhead frontman Ian ‘Lemmy’ Kilmister has been made available to view online.

Saturday’s two-hour service in Hollywood, Los Angeles, was streamed live and can now be viewed in its entirety via Motorhead’s official YouTube page and using the embedded clip below.

The GNR man said: “Lemmy was somebody that I feel blessed to be friends with. He was such a great example of what my peers wanted to be. More integrity than anybody, 100% loyal. All these fine attributes.”

An emotional Mikkey Dee added: “I miss you already, Lemmy. I miss our arguments and our hard work in the studio and on the road. It was so much fun, and I will miss it forever. Try to take it a little easier on the other side. Rest in peace. See you soon.”

The service ended with a bass guitar being laid against an amplifier and left to feedback – the same way Lemmy ended Motorhead live shows.

Kilmister died from an aggressive form of cancer at his Los Angeles home on December 28 at the age of 70. He had only been diagnosed with cancer a few days before his death.

Thank you for everything, Lemmy