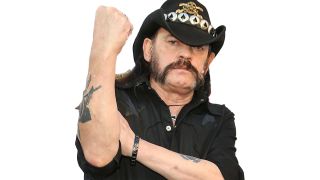 Lemmy’s funeral will be webcast live on Saturday, so that fans all over the world can pay their respects as the Motorhead icon is laid to rest.

The ceremony takes place at Forest Lawn Memorial Park in Hollywood from 3pm to 4.30pm local time (11pm-12.30am UK time). It will be streamed via the band’s YouTube channel.

A 12-hour memorial will already be underway on Hollywood’s Sunset Strip, after plans to hold it solely in the Rainbow Bar And Grill had to be changed to accommodate numbers.

Motorhead say: “Wherever you are, please get together and watch the service with fellow Motorheadbangers and friends. Go to your favourite bar or club, make sure they have access to an internet connection, and toast along with us.

“Or, simply invite your pals around and celebrate Lemm’s life at home. Whatever your venue, and however you can, let’s be sure to gather globally on Saturday, January 9, and celebrate the life of our dear friend and irreplaceable icon.”

Fans who would like to send flowers are asked to contact Karen Brando at Flowers By Michael, or make a charitable donation to the Ronnie James Dio Stand Up And Shout Cancer Fund in Lemmy’s name.

Meanwhile, the campaign to place Ace Of Spades at the UK’s No.1 spot on the weekend of the funeral remains in contention, having entered the top 10 midweek listings. Organisers have provided a full list of legitimate download and streaming options, saying: “Please don’t just like the page – we’re all here to do a job. Buy a download or two. It’s only a quid.”

In addition, a petition calling for a newly discovered heavy metal to be named in honour of the vocalist seems unlikely to happen.

John Wright has set up a online form to have the International Union Of Pure And Applied Chemistry tag the element Lemmium – but the IUPAC’s naming requirements state they can only be named “after a mythological concept, a mineral, a place or country, a property or a scientist.”

The world according to Lemmy