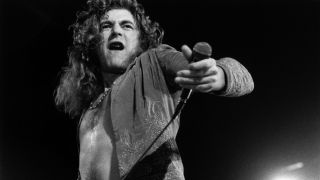 With the deluxe editions of Led Zeppelin's first three albums all hitting the top ten in the US, the band will be hoping for similar success with the next pair of reissues, due for release on October 27.

Neither of the deluxe editions of Led Zeppelin IV or Houses Of The Holy feature any previously unreleased songs, but there are plenty of alternate takes available for the first time. The former includes alternate mixes of Misty Mountain Hop, Four Sticks, The Battle Of Evermore and Going To California, plus an alternate version Stairway To Heaven, while the bonus HOTH tracks include tough mixes of The Ocean and Dancing Days. The full list of unreleased tracks is a follows:

As usual, the reissues will be available in a number of formats: single CD, deluxe edition double CD (including the companion audio discs), single and double vinyl editions, a digital download, plus a “Super Deluxe Boxed Set”. This monster includes a hard-bound book featuring 80-pages of rare and previously unseen photos and memorabilia, plus a high-quality print of the album cover.

Back in May, Jimmy Page talked about the reissue programme on the Classic Rock Radio Show, saying, “You know instinctively when something is right to do and you just jolly well do it. You put everything you’ve got into doing it. It was an epic task – I knew that – but it’s right that it should be out there.”

_Led Zep IV and Houses Of The Holy are both released on October 27. _