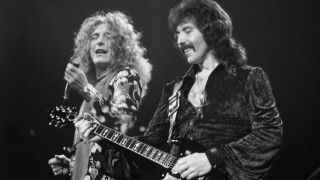 In the 1970s, rock bands didn’t come any bigger or more influential than Black Sabbath and Led Zeppelin. But any rivalry between the two groups was outweighed by their long-standing friendship – one that peaked with one of history’s greatest lost jam sessions.

“We knew Robert Plant and John Bonham from back in Birmingham,” says Sabbath singer Ozzy Osbourne of his band’s relationship with Zeppelin. “We had checked Robert out with his early bands, and he’d told us he was joining The Yardbirds. Then one day we were in this club in London called Blazes, and the DJ started playing this song. So I go up and say, ‘What’s the name of the band that’s playing? That’s fucking Robert Plant singing, he’s a big shot in Birmingham.’ And she goes, ‘It’s The Yardbirds, but they’ve just changed their name to Led Zeppelin.’ I was, like, ‘Fuck me!’”

Sabbath even jammed with Zeppelin drummer John Bonham during their early days. “When we were playing clubs, John would sometimes come along and he’d want to get up and jam,” says Black Sabbath guitarist Tony Iommi. “The first time we said, ‘OK then.’ So he got up and played Bill’s drums and just wrecked them. Bill was really pissed off, so after that anytime John came along and said, ‘Can I have a go?’, Bill would go, ‘No’ and not let him play.”

But it wasn’t until Black Sabbath were making their 1975 album Sabotage that the two bands finally got together in the studio, albeit in shambolic fashion.

“We were recording in Morgan Studios in London, and John came down to see us,” says Iommi. “He brought Planty and John Paul Jones – Jimmy Page was the only one who wasn’t there. They came in and John’s going, ‘Let’s play Supernaut!’, cos he loved that song. So he sat behind the kit and we started to play it. Of course, he didn’t play it right, but we just carried on and went into a jam.”

With Plant mainly looking on, Bonham was the chief architect of the jam. Thankfully, Bill Ward’s drum kit remained intact this time. “We were just jamming, making stuff up,” says Iommi. “Our session went totally out of the window.”

According to Ozzy Osbourne, Zeppelin had an ulterior motive for their visit. “They were signing up bands for their [Swan Song] record label,” says Ozzy. “They’d signed up Bad Company, so John, Robert and John Paul Jones came to the studio to try and coax us over as well. But we’d just been through a fucking war with our manager, so we told them to fuck off.”

While Iommi says that the jam was recorded, the legendary Led Sabbath – or is it Black Zeppelin? – session has sadly been lost to history.

“The tapes are probably somewhere, but I don’t know where,” says Iommi. “And it ruined our session anyway.”