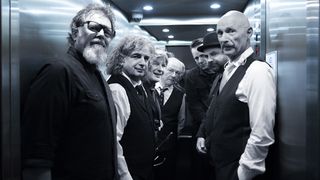 Artist Francesca Sundsten, whose work was closely associated with King Crimson, has died.

The news was confirmed on King Crimson’s DGM Live website, where it’s reported that she died from complications due to lymphoma.

Born in 1960, Sundsten’s work – which included the famous Cyclops image – appeared on Crimson’s covers, tour books and posters since 2014 – including the band’s 2019 50th anniversary tour poster.

She also designed the cover for Bill Rieflin, Robert Fripp and Trey Gunn’s 1999 album The Repercussions of Angelic Behavior.

Fripp says: “Francesca Sundsten had a unique way of seeing things – with strange, mysterious and sometimes disturbing developing-variations on her theme. I have no idea where any of this came from.

“I think it unlikely that Francesca had any sense of her power and status as an artist, nor quite how her work moved and affected people.

“We have Francescas all over our home, where they have been part of our lives well before Francesca’s seeings came to present and represent aspects of King Crimson. This is a consolation, the ongoing presence of a yet-to-be fully appreciated talent and a much-missed friend.”

A retrospective collection of Sundsten’s work will be on display at the Hall Spassov Gallery in Seattle from today (August 8).