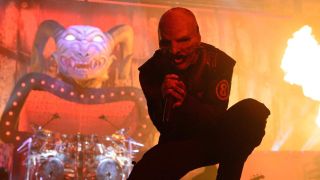 Slipknot have revealed the lineup for Knotfest 2015 – with Judas Priest and Mastodon among the big hitters due to appear.

The festival is curated by the members of Slipknot and is in its third year. More than 50 bands are scheduled to play over four stages at the San Manuel Amphitheater And Campgrounds in San Bernardino, California, on October 24 and 25. The event opens on Friday, October 23, with a pre-party.

Other acts in the lineup include Korn, Bring Me The Horizon, Corrosion Of Conformity, Clutch, Cannibal Corpse, Trivium, Gwar and Beartooth. Slipknot will headline the main stage on the final night of the festival – Sunday, October 25.

Last year’s event at the same venue attracted more than 50,000 people and Slipknot reckon this year will be even bigger.

The band’s percussisonist Shawn ‘Clown’ Crahan says: “Knotfest returns to Southern California for round two and with legends like Judas Priest headlining night one and a lineup of some of the greatest acts in metal and heavy music, we couldn’t be more excited.”

As well as the music, Knotfest includes a range of other attractions. In recent years it has featured a Slipknot museum curated by the band, carnival rides, drums circles, pillars of fire, fire-breathers, and stilt-walkers.

Tickets go on sale at 10am PST today (5pm GMT) at the official Knotfest website, where a range of packages will be available.