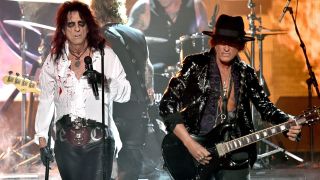 The Aerosmith guitarist was stretchered to hospital from the stage at Coney Island in New York after being seen to struggle during the concert, then staggering off before collapsing behind the scenes.

Cooper tells Rolling Stone: “It scared the hell out of me. The lyrics to Raise the Dead, the first song we played that night, go, ‘Cardiac, heart attack, they never feared the reaper,’ and I look around the stage and he’s gone.

“He was lying behind an amp on his back, and I went, ‘Oh, my God.’ We didn’t know what happened until after the show.”

“I was in shape and so was Johnny and everybody else. I think Joe was not ready for that kind of pace.”

Cooper says the band perform 25-30 songs without a break and little rest between shows, leaving Perry “dehydrated” and “exhausted.” He says the guitarist told him he hadn’t eaten in two days.

He adds: “I think it just finally got to him. It was not a heart attack – it was pure exhaustion. They checked his heart and said his heart was actually very strong.”

Perry took two weeks off to recover on doctor’s orders before returning to the stage with Hollywood Vampires.

Aerosmith frontman Steven Tyler previously expressed concern over his bandmate’s health, hinting that the Hollywood Vampires were being “overbooked.” Aerosmith have a run of South American dates scheduled over the coming months.