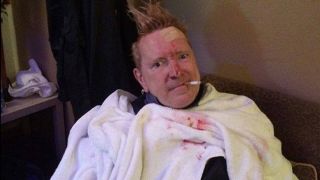 Lydon after the incident

Public Image Ltd frontman John Lydon has laughed off a glass attack from a member of the audience at a concert in Chile.

And eyewitness reports suggest he battled to protect his attacker from angry fans.

The band were playing at Club Blondie in Santiago when the incident took place. Former Sex Pistols vocalist Lydon posed for a picture soon afterwards, with a plaster on his forehead and a bloodstained towel, with a cigarette in his mouth and a trademark glare.

The image was posted on PiL’s Facebook page with the message: “Glass attack last night at Santiago. No reflection on the rest of the crowd. Great gig. It lives. Anyone got any more pictures?”

While details of the incident haven’t been revealed, an eyewitness suggested a bottle had been thrown by someone in the crowd near the front, and that aside from that moment, “the overall atmosphere was amazing.”

Another said: “I moved near the stage and saw how many people were giving an ultraviolent lesson to the guilty, and John said to people, ‘Leave him.’ They restarted the show with Public Image.”

In an interview with TeamRock last year, Lydon said: “The secret to getting on in life is resilience. You’ve got to take the punches and roll with them. And there’s no time for self-pity in this world. Just get on with it and ignore the bitterness and the twistedness. Because if you end up in a position of defending all the time, it can eat you alive.”

'Zeppelin? I Love 'Em': The Confessions Of John Lydon