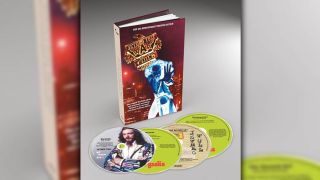 Jethro Tull have streamed another track from the upcoming limited-edition 40th anniversary edition of their classic 1974 album War Child.

The song The Orchestral WarChild Theme can now be heard ahead of the three-disc package’s official release on November 24. Previously unreleased track War Child II was made available to stream earlier this month.

The set includes a new mix by Steven Wilson plus music and a script synopsis from the abandoned film which was intended to accompany the original release. The movie, set to star Leonard Rossiter, was shelved after the band failed to secure funding.

War Child was instead released as a standard 10-track album.

War Child: The 40th Anniversary Theatre Edition is released as a 2CD/2DVD set on November 24, while the new stereo mix will be launched on CD the same day. A limited-edition 180g vinyl pressing follows on January 13.