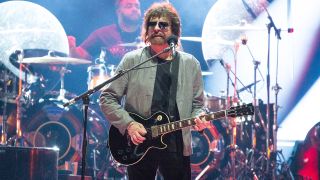 Jeff Lynne’s ELO have released a video for the new single Time Of Our Life.

The song is set to feature on the upcoming album From Out Of Nowhere which will launch on November 1 via Columbia Records.

Jeff Lynne’s ELO previously shared the title track from the follow-up to 2015’s Alone In The Universe.

The video was created using footage from their show at London’s Wembley Stadium in June 2017 and can be watched below.

A statement on the track reads: “Following the release of the first single From Out Of Nowhere, this new song gives fans another taste of what’s to come on the highly-anticipated album.”

Lynne played almost all of the music on From Out Of Nowhere, including guitars, bass, piano, drums and keyboards, along with performing lead vocals and layered harmony vocals. Engineer Steve Jay also adds percussion.