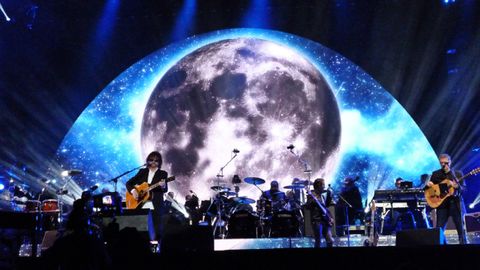 Buried deep within his nest of hair, Jeff Lynne peers out through his protective shield of sunglass as if looking back at his own personal Lost World. “What a thrill,” he gasps dumbfoundedly in Brum. “It’s unbelievable, this, really.”

Well quite. The last time Electric Light Orchestra attempted to play live, around 2001’s coolly received comeback album Zoom, the shows were cancelled due to a lack of interest – some US arenas allegedly reported sales barely reaching double figures. After 27 Top 40 hits and a 15-year absence, this once mighty band were reduced to the status of an Alan Partridge punchline. Now, 13 years on, Lynne gazes out at a sold-out one-day festival of 50,000 fully paid up livin’ things and is blown away by an outpouring of appreciation almost as overwhelming as his symphonic pop powerhouses.

Radio 2 Live In Hyde Park is a mass of contradictions. A festival fronted by cuddly Terry Wogan yet staffed by security seemingly from Guantanamo Bay. A day when new wave legends such as Chrissie Hynde (belting out Don’t Get Me Wrong and I’ll Stand By You) and Blondie (from hits to a cover of the Ramones’ I Wanna Be Your Boyfriend, Harry trussed up in an S&M-themed outfit) play second fiddle to one of the prog-pop Tyrannosaurs they spent the late 70s trying to slaughter. And all headlined by a modest, awestruck man playing the most confident, glorious music on the planet.

With the BBC Concert Orchestra sawing away passionately, pianist Richard Tandy acting as sole representative of Lynne’s peak-period band and the legendary spaceship whizzing around the screens in dazzling hi-def, Lynne’s first gig as ELO in 28 years is nothing short of spectacular. Blasting into the disco devastation of All Over The World amid his trademark swirls of intergalactic transmission phase, silky pop strings and synthesised robot harmonies, Lynne premeditates a global reunion party, stops to gasp at the view – “We’ve never seen anything like this in our lives” – and then sets out to deliver a set that delights diehards and disco dads alike.

The rush of it all gets to him early on, but a few fluffed lines can’t detract from the sultry blues swagger of Evil Woman, while the Quo-like power chords of Ma-Ma-Ma Belle firm his resolve for a first half hour leaning on the cream of his early canon. As much as it quickens the pulse when a glamorous solo violinist twirls out the opening refrain to Livin’ Thing, it’s far more momentous to the long-patient aficionado that Lynne revisits sumptuous early ballads Strange Magic and Can’t Get It Out Of My Head, or first single 10538 Overture – the missing link between I Am The Walrus and Paul Weller’s The Changingman.

Obsessives appeased, the show hits 1977’s Out Of The Blue with a passion. Sweet Talkin’ Woman, Turn To Stone and a gracefully rendered live debut of Steppin’ Out (“a song that I never quite got right,” Lynne explains, having recently dedicated himself to rerecording all of ELOs albums to iron out his perceived flaws, “it’s better than it was then”) capture that album’s lush spirit and aversion to Gs, and the inevitable Mr Blue Sky turns Hyde Park into Guilty Pleasures’ idea of a papal visit.

Aside from a tribute to George Harrison and Roy Orbison in the form of Traveling Wilburys Handle With Care and a wonderful, wail-along Telephone Line, the set winds up in a flurry of sizzle-swathed rock’n’roll: Don’t Bring Me Down, Rock’n’Roll Is King (sadly, the only track from ELO’s hugely underrated synth-led 80s era) and a closing Roll Over Beethoven that must set a new world record for bombastic boogie-woogie. Perhaps the ubiquity of his gloss-polished production has now waned enough to revive an appetite for Lynne’s music and allow for a long-deserved reassessment, but the matter seems settled. “We’ll do this again,” Lynne says – yes, as Partridge yelled that fictional night at the Birmingham NEC in 1976, come back on ELO, and carry on playing.