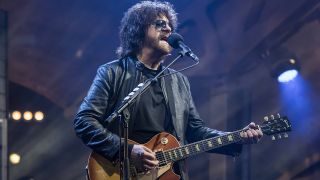 The follow-up to 2015’s Alone In The Universe is titled From Out Of Nowhere and will launch on November 1 through Columbia Records.

And to mark the news, Jeff Lynne's ELO have released the title track which can be listened to below.

Speaking about the track, Lynne says: “From Out Of Nowhere – that’s exactly where it came from. That’s the first one I wrote for this album and it’s kind of like that.”

Lynne says it’s a song about hope and salvation – a theme that runs throughout the whole album.

“Everybody’s got to have a bit of hope,” he adds.

Lynne plays almost all of the music on From Out Of Nowhere, including guitars, bass, piano, drums and keyboards, along with performing lead vocals and layered harmony vocals.

The album news comes after Jeff Lynne's ELO recently wrapped up a successful tour across North America this summer.