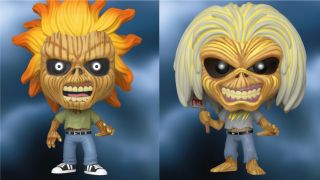 Toy manufacturer Funko have been adding some of the world’s best-loved musicians to their Pop! Rocks range over the last few years.

But there’s been someone missing from the action – not a musician, but one of rock’s most recognisable characters. That’s right – it’s Iron Maiden mascot Eddie. Thankfully, the team at Funko have decided to right this wrong and they’ll be releasing four flavours of Eddie in the not too distant future.

There’s no release date yet, but let’s hope they’re out in time for Christmas. Check out all four below.

Last week, it was revealed that Maiden had teamed up with West Ham United for the Die With Your Boots On collaboration which sees the band's logo represented on the shirts of the Premier League side.

Iron Maiden will extend The Legacy Of The Beast tour into 2020 and will also headline the UK’s Download festival next summer.

Iron Maiden: Trooper - The Collection
Iron Maiden and Robinsons Brewery are celebrating selling 25 million pints of Trooper beer since its launch in 2013 with this 12 bottle pack. Six different beers are included, so there's plenty to share as the festive season approaches.View Deal