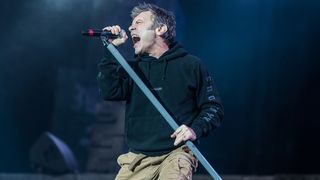 Iron Maiden have vowed to protect fans from ruthless ticket touts by implementing a paperless ticketing system in the UK.

The band are due to announce their first UK arena tour in six years on Friday – and they say they want to ensure fans are able to buy tickets at the intended price rather than the inflated prices found on many secondary ticket websites.

Iron Maiden’s manager Rod Smallwood says: “We do not want our fans being ripped off either by counterfeit tickets or through costly mark-ups on so called secondary ticketing websites.

“These problems now affect the UK more than any other country outside of the US. We believe the most successful way to prevent this is by implementing paperless ticketing.

“This proved highly successful in reducing piracy at our previous London shows in 2013 and on our North American tours since 2010. This is a simple procedure and goes a long way to minimising the resale of tickets and reducing fraud by requiring the original cardholder purchaser to be present at entry.”

He continues: “We have been working with our UK promoter Live Nation and Ticketmaster to ensure that we can operate a paperless ticketing system, in full or in part, at all the UK venues we’ll play in 2017.

“We are also instigating a number of additional measures which we believe will directly help our fans to access tickets in the fairest, safest way and at the intended price.”

As a result, the original cardholder who purchased the tickets will have to present their debit or credit card and photographic ID at the door with their guests. There will be a maximum of four tickets per person, per show available, while a dedicated customer support team will be on hand to deal with any issues from fans with legitimate problems.

Nigel Adams MP, chair of the parliamentary group on music says: “I’m pleased that Iron Maiden are taking a principled position and standing up for music fans.

“I’d like to think the whole industry can learn from this initiative and use technology to put a stop to the industrial level of touting that has been a blight on the live music industry for so long.”

Iron Maiden have set up a FAQ on their website to help answer questions about ticketing from fans.

Maiden have long campaigned against the secondary ticket market and ticket touts. Last year, they joined Radiohead and Foo Fighters in an open letter to the UK government calling on them to crack down on secondary sales.

In May, Maiden welcomed government recommendations calling on sites such as Viagogo, Get Me In, StubHub and Seatwave to take more action to prevent touts from buying concert tickets in bulk.