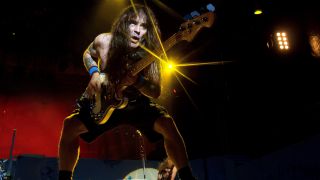 Iron Maiden’s Steve Harris says he’s happier than he’s ever been at any point in his heavy metal career.

Helping Metal Hammer magazine celebrate its 30th anniversary, the bassist says metal is in a good place and Maiden are in better shape than ever before.

Recalling the band’s early days, their 1990s slump and their stunning return to the peak of their metal powers, Harris says: “Well done to anyone who’s lasted this long, whether it’s Metal Hammer of Iron Maiden or whoever!

“Personally I’m enjoying it more than ever, I’d say. We all are. Ultimately, at this point you know you’ve had most of your career and there’s less ahead than there is behind you, but we’ll definitely make more albums and we’re having a great time.

“This is still the best job in the world.”

Maiden are riding high after the release of 16th album The Book of Souls last year and the massive world tour that followed. It followed frontman Bruce Dickinson’s successful battle with cancer.

In the 90s, the band faced a spell without Dickinson as he left to pursue a solo career. That, coupled with the negative attitude towards the genre at the time, made it a difficult period for Iron Maiden.

Harris says: “It was a tough time. Back then almost everyone was going through squeaky bum time, weren’t they?

“It was obvious something was amiss, but we all just kept going even when the whole metal scene was weak at the knees. It was just one of those times when anything that suggested ‘heavy metal’ was a bit of a no-no.”

The full interview with Harris can be read in the 30th anniversary collectors’ edition of Metal Hammer magazine, which is available now in print and via TeamRock+.

It also includes interviews with Gojira, Trivium, Judas Priest, Steel Panther, Slipknot and Korn – among many others. The magazine also comes with a free CD called Decades Of Destruction featuring a string of top metal acts covering tracks by other bands.