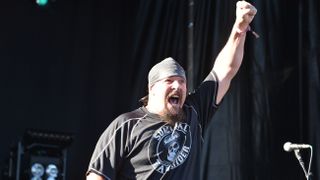 Suicidal Tendencies frontman Mike Muir says he regrets that the band haven’t built up a bigger fanbase in England.

The vocalist says the thrash heroes play small venues when they are in England and that they have, for whatever reason, never been able to attract young fans in the UK.

Muir tells Metal Hammer: “Honestly my biggest regret is that we’re nothing in England. There’s a lot of excitement everywhere, except in England as usual. But I think if we never do another English tour then I’ll regret that.

“I know that we haven’t because there isn’t any demand for it, but when people talk they talk very loudly. One of the big differences is that we’re able to play festivals in other countries and attract young people, people that don’t usually come to our shows – that’s our next generation.

“But when we do Download we’re on the smallest stage, and it’s all older people. I’m not going to discriminate about age, but it happens.”

Muir and Lombardo are joined in the lineup by guitarists Dean Pleasants and Jeff Pohan, as well as bassist Ra Diaz. And The singer believes the new lineup could finally be what brings the band a growing audience in England.

They play in London as part of next year’s Persistence Tour with Agnostic Front, Municipal Waste, Walls of Jericho, Down To Nothing, Burn and Mizery.

“I’d love to come back now, with the band we have now,” Muir says. “I’m very confident of where we are right now and I’m comfortable that we’ll do well in whatever the environment is.

“Ultimately what will happen is we’ll do a club tour and it’ll be half-empty. I joke about it, and you’re not supposed to say that. We’re coming back through London on the Persistence Tour, but I’m smart enough to know London isn’t England.”

Suicidal Tendencies are currently on the road with Megadeth.