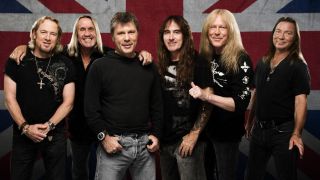 Iron Maiden’s tour on the back of 16th album The Book Of Souls could run for two years, drummer Nicko McBrain has suggested.

And he’s described the follow-up to 2010’s The Final Frontier as “a stunning piece of work.”

McBrain tells 98.7 The Gater: “As everybody knows it’s been in the making for a while – and it’s definitely worth the wait.

“Every time you make a record it’s the best you’ve ever made. This one, without a doubt, is the best record we’ve ever made. Sonically it’s brilliant. The compositions of the songs are fantastic.”

Asked about touring plans, the drummer says they’ve been given a guideline from manager Rod Smallwood. “It’s still up in the air as to where and when. It’s going to be a big one, I’m sure.

“Rod’s told us not to do anything for two years. We really don’t know yet.”

Maiden this week announced plans to release a limited-edition stronger version of their Trooper beer, to mark the sale of 10 million pints since it went on the market in 2013.