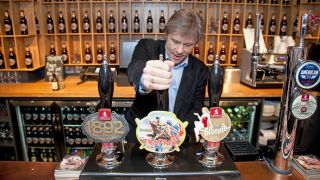 The Vintners’ Hall, a palatial 17th Century craft lodge in East London. It’s October 2014 and the great and good from the packaging and brewing industries gather for the British Bottlers Institute Gala Evening. There’s a lavish sit down dinner during which assembled DJ-clad throng discuss bottles, beer and storage containers before the winners of the annual BBI awards are announced.

Not really the sort of beano you’d expect Britain’s most successful metal band to gatecrash.

Except that’s exactly what Iron Maiden did. That night last autumn saw them take home the Gold Award for their 4.8% premium ale Trooper, a beer that has astounded many in the British brewing industry - and beyond - by its rapid (and unexpected) success. Since it was launched two years ago it’s sold over ten million pints and been exported to 42 countries. When it went on sale at the Download festival in 2013 it sold out completely, and the band have just announced a new, stronger version called Trooper 666.

Of course, it’s hardly the first rock-related beer to have emerged in the last few years. Most of these have been little more than promotional gimmicks, short term wheezes to tie in with an album campaign. From the start Iron Maiden wanted Trooper to be different. “It would be very easy to knock up a three and a half percent beer as cheaply as possible and hope that millions of Maiden fans go and buy it,” says Dave Shack, Managing Director of Maiden’s management company Phantom. “We couldn’t just put an Iron Maiden sticker on a brew. That’s not the way we do things. Our fans know that. If we were going to do this, we’d do it properly.”

The original idea was for an Iron Maiden wine. “We chewed it around and thought ‘actually what’s more appropriate for our fans would be a beer’.” With that brief in mind, Phantom very quickly came across Robinson’s.

A family-run Cheshire-based brewer with a history that dates back to the 1830s, Frederic Robinson proved ideal partners. They’d obviously heard of Maiden but perhaps didn’t entirely know what they were dealing with. Certainly though they were impressed when they met Bruce Dickinson, not realising that in addition to his extra curricular interests of flying, fencing and writing, the frontman is a certified real ale nut.

“They didn’t expect him to be quite so forthright, opinionated and with a very clear view of what he wanted in a glass,” says Shack. “The story goes that they did a blind tasting with Bruce and he named 7 of the 10 beers - not just what they tasted of but the names as well.” Both parties knew then that they were serious about this project.

Bruce took a central role in developing the beer - testing and tasting and sampling until singer and brewery had something both were happy with. They’ve come up with an ale with mixes a malt-y flavour with a subtle hint of lemon, a beer that, at 4.8%, is robust but not overpowering. “We wanted something you could have three or four pints of and not be flat on your back with a hangover the next day,” the frontman insists.

The name Trooper was an obvious choice. First released on Maiden’s 1983 album Piece Of Mind, it’s one of their best-loved tracks and to this day remains one of the highlights of the band’s live show. The song itself - penned by bassist Steve Harris - was inspired by the Tennyson poem The Charge of The LIght Brigade and celebrates the bravery of ordinary soldiers during one of most ignominious episodes of British military history. The beer’s label reprises the original single artwork, with an ‘Eddie’ figure clutching a torn Union Flag in one hand and a cutlass in another.

The attention to detail doesn’t just extend to the artwork. Trooper is one of the star attractions at Ramblin’ Man Fair’s beer festival next weekend (25/26th July). To ensure Ramblin’ Man fans will be able to experience Trooper in the freshest condition possible, the night before the festival a special batch of Trooper will be filled into aluminium kegs before making the 256 mile journey from Robinsons brewery down to the festival site at Mote Park.

Maiden fans have obviously given it the thumbs up but what’s been interesting has been the response of the brewing trade to this interloper from the world of rock. “I think they’ve been shocked at its success,” say Shack. “Brewers that I admire like Timothy Taylors, even big companies like Marstons, when we meet them at trade things they shake their heads at disbelief at the volume we’ve been able to do.”

Ultimately, that success is down to the fact it’s just a great beer - medium-bodied, amber-hued, with a slightly citric, bread-y taste. “All the embellishments - the marketing, the name, the artwork - wouldn’t mean a thing if it didn’t work as a beer,” says Shack. “I think anyone who tastes it, whether they’re an Iron Maiden fan or a passing drinker would go ‘it’s actually a damn good drop of English ale’. Everything else is just gravy.”

Or in this case, froth.