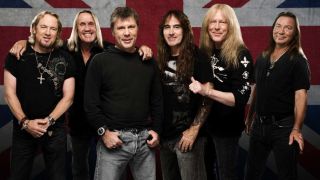 Iron Maiden bassist Steve Harris has called Empire Of The Clouds a “masterpiece” and says it’s a complete departure from their previous material.

The 18-minute track was penned by frontman Bruce Dickinson and will feature on their 16th record The Book Of Souls. Their first-ever double studio album will be released worldwide on September 4.

Harris tells Kerrang: “I think it’s a masterpiece, actually – I think I can say that because I didn’t write it! It sounds like Maiden but it’s totally different from what we’ve done before.

“Eighteen minutes sounds like a long time, but it’s actually such a journey that… well, it’s best just to leave people to listen to it and see what they think. But it’s very interesting. It’s certainly not boring.”

He continues: “I think you’ll see on this album that there’s a lot going on. There’s a hell of a lot to take in. I think there’ll be bits and pieces that will hit people initially but I think they’re going to need a few listens.”

The band announced in May that touring plans to support the album wouldn’t happen until 2016 to allow Dickinson time to fully recuperate after his successful cancer treatment.

But Harris says he’s already looking forward to playing and that the shows will carry extra significance after the singer’s health concerns.

He continues: “Whenever we do a new album we always go out with a new stage show – that’s exciting in itself.

“We always feel like every show is sacred these days anyway, and I suppose even more so now after the scare with what’s happened with Bruce. It makes everything more important to us.

“The Book Of Souls is a really powerful album, we’re really proud of it and we can’t wait to come out and play new songs on tour.”

Harris will head out on the road with his solo outfit British Lions later this month.

The Book Of Souls tracklist