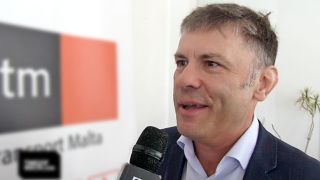 Bruce Dickinson has light-heartedly described himself as a former full-time pilot who had to take unpaid leave to front Iron Maiden.

He’s flown commercial airliners for 16 years and now owns an aviation firm – but that all came after he’d found success with the NWOBHM giants in the 1980s.

He brought his career paths together by hiring Ed Force One from the firm he flew with in 2008, and piloted it during Maiden’s Somewhere Back In Time tour.

Dickinson tells the Times Of Malta: “When I was in employment as a regular line pilot, I used to take unpaid leave to go on tour with Iron Maiden. I got lucky – they let me off.

“It did help that we rented one of the company’s aeroplanes and went round the world three times. I generated a few million bucks of income, so I think that put me in the good books with the chairman of the board.”

Now he’s boss of Cardiff Aviation he says: “I can juggle my time as I wish. Come time to go on tour with Iron Maiden, I’m going to be running for the hills.”

The vocalist is currently recovering from cancer treatment after two tumours were found in his throat, forcing the band to delay the launch of 16th album The Book Of Souls.

Dickinson says: “I did take it easy for a while and I’m still conscious that I should take it easy.” But he adds: “Why? If I’m feeling fine, fit and all the rest of it?

“I consider myself to be extremely lucky that everything is okay. I’ve got a completely unrestricted airline medical back, just as good as it was before.

“The doctors were amazing. The treatment was uncomfortable but it worked. I’m cautiously happy with the outcome.”

Maiden will announce a 2016 world tour in due course. The Book Of Souls – their first-ever double album – is released on September 4.