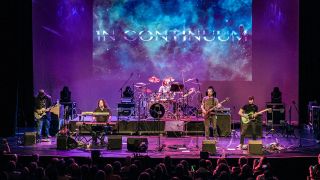 "It was a new thing for me to let the first In Continuum concept album Acceleration Theory end on a cliff-hanger," Kerzner tells Prog. "The new album, which is part two of the story called Annihilation, has a very different ending."

Kerzner formed In Continuum as a vehicle for songs he'd originally written for the follow-up to Sound Of Contact's 2013 Dimensionaut album. The album features Nick D'Virgilio and Marco Minnemann on drums and Randy McStine, John Wesley and Fernando Perdomo on guitar.

Kerzner has also released a new live album, Static Live, out now, which is a live performance of Kerzner's 2017 solo album Static. The album is available as a double CD Special Edition  for download and CD pre-order from Kerzner's Sonic Elements Bandcamp page. The second CD features special guest Francis Dunnery, of It Bites fame and contains a 3 song tribute to the late Kevin Gilbert.