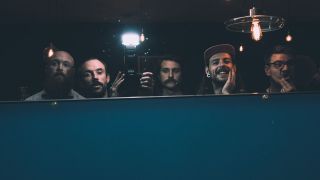 Idles have released a video for their new single Great.

The song, which takes aim at Brexit, will feature on the band’s upcoming album Joy As An Act Of Resistance, which is set to arrive on August 31 via Partisan.

Singer Joe Talbot says of the track: “Let us go forward with open minds and open hearts into that fuck off fire we've started. No blame, no hate. Just love and a blue passport.”

Earlier this month, Idles announced details of a pop-up art exhibition which will raise money for the Samaritans.

The gallery will contain 18 contributions from 10 artists, inspired by each of the songs on Joy As An Act Of Resistance and will be held at HM Electrics Gallery, London, on August 30-31. Entry will be between 12-8pm and is free to attend.

Idles recently announced a run of live in-store dates in support of the new album – find details below.