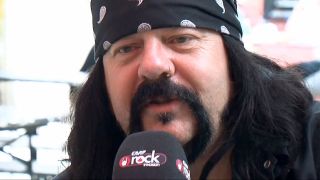 Vinnie Paul has slammed fans who want a Pantera reunion as selfish.

Speculation has circulated for some time that the band could regroup with Zakk Wylde in place of murdered guitarist Dimebag Abbott – providing frontman Phil Anselmo and Dime’s brother Paul can settle their differences.

But the drummer tells EMP Rock Invasion: “People are selfish. They want what they want; they don’t care what you want. People go, ‘Oh wow, they can get Zakk to jump up there on stage and it’s Pantera again.’

“No it’s not. It’s not that simple. If Eddie Van Halen was to get shot in the head four times next week, would everybody be going, ‘Hey, Zakk, go play for Van Halen – just call it Van Halen.’

“It’s really selfish for people to think that, and it’s stupid. It’s not right at all.”

And he underlines that his brother’s death rules out any true reunion, saying: “There’s a lot of these things they call reunions that aren’t really reunions. They’ve got one dude from the band floating around in them – that’s not a true reunion. With Pantera, it’ll never be possible.”