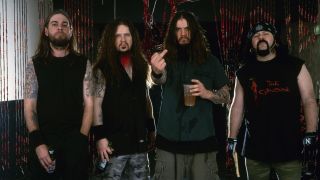 There’s still a small scar on the top of my head from when Pantera played the Marquee Club on Charing Cross Road, back in January 1993, a tooth-mark from a stray stage-diver. The cut continued to bleed that night while we all headed up to the Camden Underworld to drink heavily, kind of a cool little badge of honour, and Dimebag took some footage of it that was never seen again. Pantera had just devastated the Marquee, like this hell-bound, whiskey-fuelled hurricane, back when frontman Phil Anselmo could still insist that “our stage is your stage”, and encourage lunatics to launch themselves off the PA; back when Pantera were a young and hungry gang with something to prove. It was one of those perfect gigs, a perfect storm, engrained in the mind forever (quite literally in this case), never to be forgotten or repeated. For starters, the Marquee’s not there anymore.

Incidentally, an enormous amount of money was spent trying to reopen the Marquee at a different location, but the carpets were too clean and it sucked. Money can’t buy memories or rites of passage, but it never stops people from trying to buy the rights. Nowadays, when you interview members of Pantera you can almost hear the money that’s being waved at them to entice them to reunite, you can smell it, taste it. It’s probably a lot of fucking money. After they broke up, Josh Homme was reported to have turned down a quarter of a million for one Kyuss show. That’s peanuts, chicken feed, compared to what’s being dangled in front of Pantera.

The record company will listen in on the interview and, should you hint at anything that might interfere with said reunion – like agreeing that a reunion is a terrible idea – they will later gently suggest that you don’t “stray off topic”. Unfortunately, while they listen in, they don’t appear to listen. Here’s what drummer Vinnie Paul said in 2014 about a Pantera reunion: “I’m not interested because there’s no Dime and, to me, if there’s no Dime there’s no Pantera. That’s my reason. It’s behind me, I’ve moved on.” Which seems pretty straightforward. That’s a no, right? And it’s not difficult to understand why.

Let’s not forget that guitarist Dimebag Darrell was murdered, senselessly shot down on December 8th, 2004, while on stage with Damageplan, only a year after Pantera had acrimoniously parted ways. A lot of back and forth unpleasantness had occurred in the press after Pantera broke up, though, in hindsight, nothing that probably couldn’t have been solved over a few beers at some point. With Dimebag’s death, however, there was no way to make it right, no way to take those words back. Every Pantera fan knows what happened. Four people died that night, and with them Pantera died.

In the past, Vinnie has rightly accused people of being selfish for wanting a reunion. Reunions, for the most part, are always missing some vital spark, and in this case a very vital spark. Reunion can be a horrible word, with a bitter after-taste to it, like some disgusting health drink that you’re only drinking because you’re too old to do shots for breakfast anymore. Who the fuck wants a reunion? The school reunion where you don’t recognise anyone, the old folks reunion where you count a few less in number every year. Reunion implies the passing of time and a distance that can never be bridged. Here’s what happened when everything turned to shit. Ex-friends, ex-lovers, and, indeed, ex-bandmates, with whom things will never be the same, and never be as good.

There are rare exceptions, of course, those melancholy buggers Soundgarden being the obvious example, but that’s because they will help to sweep the ashes of your broken heart, or stay by your side while you wander lost. That’s kind of their speciality, they weren’t known for being particularly fucking hostile. Even then, classics like Black Hole Sun and even Fell On Black Days have become couples’ music, blasts from the past. Which is nice if you can go there, but could just as easily feel like poking at a rotten, black tooth, without the grin.

As has been widely and wildly speculated, the best case scenario for a Pantera reunion – if not for their legacy – would be with Black Label Society’s Zakk Wylde on guitar. He was Dimebag’s friend, after all, and recent regular appearances from Anselmo performing Pantera’s I’m Broken with BLS have only served to get the rumour mill spinning again, especially after they were joined by former Pantera bassist Rex Brown. No doubt that was great, but it’s wasn’t Pantera, not even close. And, sure, Zakk’s a phenomenal guitarist, but he’s not Dimebag, and could only serve as a reminder of what has gone. Pantera has gone.

It sucks if you never got to see them live, you really missed something special, but you probably never saw the Beatles, either, or the Sex Pistols when they mattered. Classic rock ‘n’ roll, real, life-affirming rock n roll – which is what Pantera were – is about those snapshots in time, everlasting and instantly gone; it’s not about reruns and remakes. The albums are to keep, but live shows are only for those who were there. Do you really want to see Pantera’s greatest hits for the money? Pantera holograms, maybe? Or would you rather remember four cowboys from hell who played like there was no tomorrow, annihilating anyone who was foolish enough to share the same stage? Without Dimebag it will only ever be the former: none of this close your eyes and it could be them shit, you watch Pantera with your eyes open!

So call me selfish, but I’ll keep my tooth-mark and my memories, and you can keep your Pantera reunion. It’s long past time we moved on and stopped living in the past. Pantera is dead, long live Pantera.