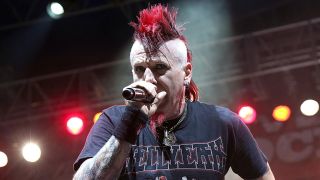 Tribbett and Bob Zilla were shown the door by Hellyeah in February this year, with Gray calling their involvement in the band a “toxic situation” and drummer Vinnie Paul stating the pair lacked drive.

But despite the acrimonious split, Gray says getting Mudvayne back together along with Tribbett wasn’t out of the question.

Speaking about Tribbett in an interview with Revolver magazine, Gray says: “He has always been my right-hand man. He’s been the back I look at when I’m writing songs and the sounding board for my ideas. When everything went sideways, it was like losing a great friend and I was filled with fear and emotions.”

When the frontman was asked if Mudvayne were officially over, Gray responds: “I don’t think so. We all still talk and I’m not ready to put a headstone on anything yet.”

Mudvayne’s last album was 2009’s self-titled offering, while Hellyeah released their fourth album Blood For Blood in June this year.

Hellyeah will head out on a US tour in September with Five Finger Death Punch, Volbeat and Nothing More.