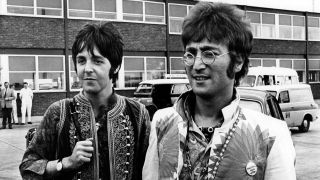 The songwriting duo had grown up together listening to the same music and following the same fashion trends over the years – and their relationship was “irreplaceable”, the 74-year-old says.

Remembering their meeting following the break-up, McCartney tells Rolling Stone: “He hugged me. It was great, because we didn’t normally do that. He said, ‘It’s good to touch.’ I always remembered that – it’s good to touch.”

McCartney continues: “John and me, we were kids growing up together, in the same environment with the same influences. He knows the records I know, I know the records he knows.

A remastered version of The Beatles’ Live At The Hollywood Bowl featuring their 1964 and 1965 shows at the venue will be released on September 9.

The Beatles: Eight Days A Week - The Touring Years, a documentary exploring the early years of the band, will also launch in the UK on September 15 before rolling out across the world. It’ll be available to stream exclusively to Hulu subscribers from September 17.

Paul McCartney has a number of tour dates scheduled over the coming months, including an appearance at Desert Trip in California alongside the Rolling Stones, Bob Dylan, The Who and Roger Waters in October.

Opinion: Paul McCartney, the Stones & Dylan at Desert Trip? The best idea ever