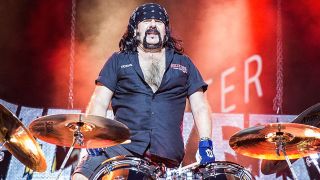 Vinnie Paul: \"It's going to be awesome\" (Image credit: Getty)

Former Pantera drummer Vinnie Paul says the time is right to return to the city where brother and bandmate Dimebag was shot dead on stage.

Paul’s band Hellyeah will appear at Rock On The Range in Columbus, Ohio, on the weekend of May 20-22. It takes place close to the location of the 2004 Damageplan show that ended with the murder of Dime and three others, while the gunman was also killed and seven were wounded.

Paul tells Big Smash Radio: “It’s taken me a long time to get into the right headspace where I feel like it was time to do it.

“It wasn’t anything specific. We’ve been offered it just about every year Hellyeah’s been together.

“This year it just kind of hit me. I said, ‘You know what? I think it’s time for the people there to hear what we do – to go back and do my thing, and show a little love to my brother.”

Paul reveals festival organisers had always been sympathetic to his feelings. He says: “Every year they were like, ‘Just let him know the offer’s there, that we’d love to have him come play.’”

Meanwhile, the president of a charity named in honour of Dimebag has stepped down after being accused of financial misconduct.

Rob Eichelberger, former head of Ride For Dime, is said to have redirected money and properties intended for charitable use to fund his own lifestyle.

The Dallas Observer reports one witness saying that Eichelberger “was able to quit his job and upgrade his personal possessions” as a result of wrongdoing.

Eichelberger denies any subterfuge, saying that he only took money to recompense his expenses for activities related to Ride For Dime work. He’s been replaced by Rita Haney, Dimebag’s girlfriend.