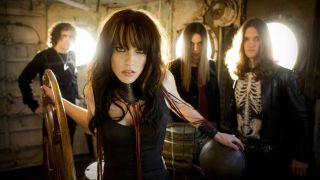 Halestorm have launched an online countdown to the announcement of their 3rd album.

The project comes on the heels of last month’s vinyl release of Reanimate: The Covers Collection (2011-2014), which combines their two cover EPs – 2011’s _Reanimate _and 2013’s Reanimate 2.0 – into one package. The set features tracks originally recorded by artists including Guns N’ Roses, Judas Priest, AC/DC and Marilyn Manson.

A clock on halestormrocks.com is actively ticking way until January 13, while the band are simultaneously revealing individual letters in the album’s title via their social media outlets – a total of 15 will be unveiled by the launch date.

Frontwoman Lzzy Hale has taken to Twitter to spread the word, tweeting “Countdown has begun” and “Prepare yourself!!! #11315”.

The band’s sophomore album, 2012’s The Strange Case Of…, which delivered Halestorm a US Top 20 album and a Grammy Award in the Best Hard Rock/Metal Performance category for the track Love Bites (So Do I).

Asked if the group were feeling pressure to follow up that success, guitarist Joe Hottinger tells The Rock Revival: “To me, I hope it does well. With the last record, we chased what excited us. And we’re doing the same thing. So if the song and the sound excites us, we go for it and hope that things follow.”

Hale adds: “We try not to think too much about what it could be, ‘cause, in reality, nobody knows: labels don’t know, we don’t know, nobody does. Radio doesn’t know… It’s either gonna hit or not. Our bottom line — and maybe this is selfish of us — is that we have to be stoked, as the four of us, we have to be stoked about this record and want to play all these songs out live.”

The singer has previously revealed that the band approached the upcoming album as a performance-based record with songs recorded as close to live as possible in a Nashville studio.

Halestorm will return for a 10-date UK tour in March, with support from Nothing More and Wilson.