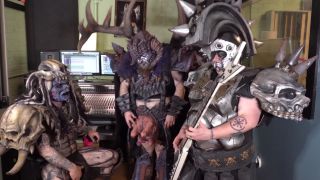 Gwar in the studio

Gwar have confirmed they’re working on their first album since the death of frontman Dave Brockie, aka Oderus Urungus.

The singer died from an accidental heroin overdose in 2014, with the band continuing to tour after his death to mark their 30th anniversary.

Now they say work will commence on the follow-up to 2013’s Battle Maximus – and they say the writing process has begun.

They say in a statement: “Yes, Gwar has united itself to record yet another disasterpiece and it has been secretly in the writing phase for months in a crackhouse of seclusion in the northside of Chicago.

“A due date for the record has not been decided but the band is grinding out what may prove to be their most savage and bloodthirsty tracks to date.

“The Scumdogs are also currently searching for a producer that is brave enough to risk their life to give them the tones of the gods to make this next record stand as a testament to the next era of Gwar.”

The band’s Pustulus Maximus has also given a tongue-in-cheek update from the studio, where he says that things are so far “going pretty fucking good.”

The band will hold their annual Gwar-B-Q on August 20 in Richmond, Virginia.