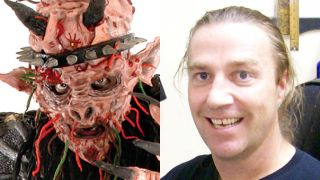 Gwar mainman Dave Brockie has died at the age of 50, according to various online reports.

News that the frontman – known by his alter ego as Oderus Urungus - had been found dead by room mates last night were followed by a statement from Lamb Of God frontman and fellow Richmond, Virginia native, Randy Blythe, who comments: ”Got a very sad call tonight from my buddy Chris Bopst, who was one of the original members of GWAR- my friend Dave Brockie, AKA Oderus Urungus, the singer of GWAR, has left the building & taken off back to his home planet. He was 50 years old. I do not know details of why he died yet, just that he passed away at home & his roommates found him.”

Former GWAR bassist Mike Bishop told Style Weekly: “Dave was one of the funniest, smartest, most creative and energetic people I’ve known. He was brash sometimes, always crass, irreverent – hilarious in every way. But he was also deeply intelligent and interested in life, history, politics, and art.

“His penchant for scatological humour belied a lucid wit. He was a criminally underrated lyricist and hard rock vocalist. A great front man, a great painter, writer, he was also a hell of a bass guitarist. I loved him. He was capable of great empathy and had a real sense of justice.”

Gwar had just completed a tour of Australia during which they decapitated an effigy of the nation’s Prime Minister, Tony Abbot, resulting in an outburst of anger from pressure groups and even the demand that they be barred from returning. They’d just announced their annual Gwar-B-Q event in hometown Richmond, Virginia, would take place on August 16.

The Grammy-nominated SF/horror-inspired metal heavyweights formed in 1984 and has been through many lineup changes, with Brockie the only member to be present in them all. They released their 13th album, Battle Maximus, last year. An official statement on Brockie’s passing is expected shortly.