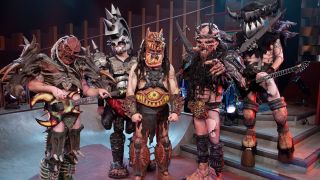 Gwar are planning to release a book which will detail their history through first-hand accounts and previously unreleased photographs.

Let There Be Gwar has been complied by Bob Gorman and Roger Gastman and is expected to launch in late August/early September.

The band say: “This book is a record and testament to all that is Gwar – the band who redefined the meaning of performance in rock music with their outlandish costumes and intense theatrical performances.

“Bohabs the world over will delight in the wretched world of Gwar through the pages of this, the most monstrous book since The Necronomicon.”

Along with the standard 350-page hardcover release, a limited run of 150 books will be made available, each signed by all the members of the band.

Let There Be Gwar is now available to pre-order.

Last month Gwar became embroiled in legal row over late singer Dave Brockie’s ashes when his father launched a $1 million lawsuit. William Brockie claimed the band capitalised on the death of his son by stealing his remains, withholding payment from their final tour with the vocalist also known as Oderus Urungus, and taking various personal items.

The band hit back saying they “acted to honour” their fallen friend.

The frontman died from an accidental heroin overdose in March last year.