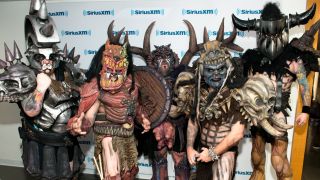 Gwar have performed a cover of Howard Stern’s track Silver Nickels And Golden Dimes on his radio show.

The DJ wrote the song when he was in sixth grade at school and a long-running gag has seen various artists cover it on his Sirius XM radio show.

Gwar’s take on the song can be heard below.

Earlier this year, Gwar confirmed they were working on their first album since the death of frontman Dave Brockie, aka Oderus Urungus.

The singer died from an accidental heroin overdose in 2014, with the band continuing to tour after his death to mark their 30th anniversary. Work continues on the follow-up to 2013’s Battle Maximus.

They said: “Yes, Gwar has united itself to record yet another disasterpiece and it has been secretly in the writing phase for months in a crackhouse of seclusion in the northside of Chicago.

“A due date for the record has not been decided but the band is grinding out what may prove to be their most savage and bloodthirsty tracks to date.

“The Scumdogs are also currently searching for a producer that is brave enough to risk their life to give them the tones of the gods to make this next record stand as a testament to the next era of Gwar.”