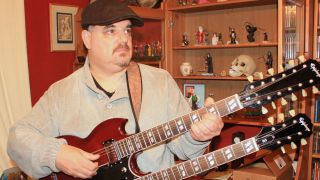 “Post United Progressive Fraternity and the appearance at Summer’s End in 2014 and a short tour, I wanted to establish a new musical venture away from my solo Manning stuff. I had lots of new, different material written, I just needed the best musicians I could find who liked the pieces enough to join me,” manning tells Prog.

“When Stephen Lambe invited me to perform at this years Summer’s End, my first thought was, “how am I going to be able to bring a line-up together which can do justice to the album already in production?) This was gong to be like assembling The Avengers or the Magnificent Seven (or six in this case)…

“As it turns out, there have been some fortuitous decisions/happy accidents made by Lambsie and Huw Lloyd-Jones which made some of this a hell of a lot easier for me. Firstly, Seven Steps To The Green Door were invited to perform on the Saturday, so I knew Marek would be there anyhow. Secondly I contacted Sean and asked him if it would be at all possible that he could get across for it. And to my absolute surprise and delight, he agreed!

“Thirdly, we needed a guitar player of considerable talent. When Dan suggested his colleague Luke Machin and approached him on my behalf, I was astounded when Luke agree to also be a part of this show as a Special Guest!

“Fourth, we just needed a superb, inventive, quick learning drummer! I was mulling it over and wondering this when suddenly there was a line up change at Summers End and Heather Findlay’s Band were booked to appear. I have played a number of events where Henry Rogers was drumming and I was always impressed by the skill and passion in his performances..so I thought, why the hell not ask?

“I am happy to report that Henry has come on board again as a Special Guest and so (like Marek) will performing twice at this years festival. So that just leaves me letting the side down against the weight of this impressive troupe of musicians. I am going to have to up my game!”

Manning points out that logistically the intentional line-up of Damanek cannot be sustained for live work, so this appearance marks a one-off for the band and festival. The band are currently working on their debut album,On Track, which is slated for Spring 2017 release. For further information visit the Damanek website. Summer’s End 2016 has completely sold out.