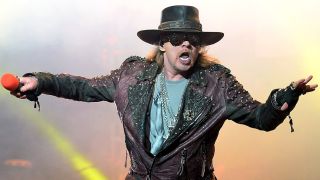 The Guns N’ Roses reunion tour is set to take the band outside the United States, according to The Cult guitarist Billy Duffy.

He says his outfit have been lined up as a support act for shows that haven’t yet been announced, but have been booked to follow Axl Rose, Slash and Duff McKagan’s first appearances on stage together since 1994.

Guns N’ Roses this week released a list of US cities they’re planning to visit following their first six reunion appearances at the T-Mobile Arena in Las Vegas on April 8 and 9, at the Foro Sol in Mexico City on April 19 and 20, and at the Coachella festival in California on April 16 and 23.

Duffy tells Vanyaland: “I believe we will be playing with them at a couple of shows that are not in the United States.

Speculation remains heavy over who will join Rose, Slash and McKagan on stage. Classic-era drummer Steven Adler was last week said to be preparing a “big announcement,” while the band this week posted pictures of Ahead-branded drumsticks, which aren’t currently used by his replacement Matt Sorum or most recent sticksman Frank Ferrer.

Meanwhile, Rose remains the subject of speculation that connects him with the vacant role of AC/DC frontman.