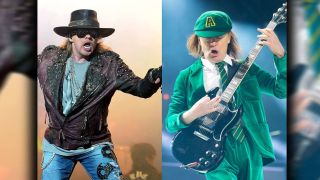 Axl Rose has been spotted leaving a studio apparently on the same day as members of AC/DC – adding fuel to rumours that he is being lined up as a possible replacement for Brian Johnson.

The rumours began last week that the Guns N’ Roses frontman was in Atlanta, Georgia, to meet with members of AC/DC, who recently had to reschedule a number of shows after their singer Johnson was ordered to stop touring or risk going deaf. AC/DC indicated their intention to play the shows with a guest vocalist.

A local DJ in Georgia said he had it on good authority that Rose was set to guest with AC/DC, and Malcolm Young’s son Ross reportedly said on Facebook: “It’s true.” Ross Young had posted a link to a story about Rose working with AC/DC, but his link was later deleted.

AC/DC then responded to questions about the rumours by saying: “Nothing official to announce. Will update you if that changes.” Neither AC/DC or GNR’s management have moved to confirm or deny the rumours.

Now TMZ have published an image showing Rose leaving an Atlanta studio, as well as an image showing Angus Young and other members of AC/DC leaving the same venue. TMZ report that both images were taken on Good Friday.

AC/DC’s equipment is thought to be in Atlanta as they were due to play at the city’s Philips Arena on March 8. That show was one of those rescheduled after Johnson was told he can no longer perform live.

Rose is preparing for a number of shows with the reunited GNR lineup of himself, Slash and Duff McKagan, who last week announced the cities they intend to cover on a summer North American tour – but did not give dates or venues.