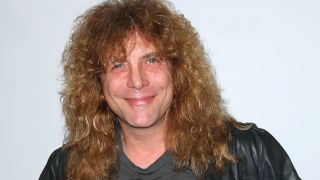 And the venue, in announcing the cancellation, has promised he’ll make a “big announcement” in the near future.

Only frontman Rose, guitarist Slash and bassist McKagan have been confirmed to be involved in the GnR performances, although the charity donation of a signed drum head last week seemed to suggest that Frank Ferrer would be behind the kit.

The band have confirmed six show next month: at the T-Mobile Arena in Las Vegas on April 8 and 9, at the Foro Sol in Mexico City on April 19 and 20, and at the Coachella festival in California on April 16 and 23.

Adler was set to play at the Whisky A Go Go in West Hollywood, California, on April 1.

A tweet from the venue uses a picture of Adler’s likeness from the band’s skull motif and reads: “The Steven Adler show on 4⁄1 has been cancelled. Stay tuned for a big announcement! #GunsNRoses”

GnR fired him in 1990 over his addiction issues, and he’s continued to struggle with drink and drug problems throughout his life. It’s been speculated among fan groups that he might not be capable of playing a full band set.

Meanwhile, one fan has reported more performances are to come after meeting Rose in Atlanta, Georgia this week.

Mark Gugliemo posted a picture of himself with the singer and said: “It really looked like he’s been working out a lot. His arms looked muscular.” He added that he wished him luck with the six shows, and Rose replied: “Thanks, man – but we’re going to do a whole tour.”

Guns N’Roses are the cover stars of the current edition of Classic Rock, on sale now in print, digital and via TeamRock+.